Fundraising from your Audience: Crowdfunding

The EU has defined crowfunding as an emerging alternative form of financing that connects directly those who can give, lend or invest money with those who need financing for a specific project. It usually refers to open calls through the internet to the wider public to finance specific projects. Promoters of an initiative can collect funds directly. However, a web-based intermediary, a so-called ‘crowdfunding platform’, will often assist in publishing campaigns and collecting funds. In exchange, these platforms often charge a fee. While calls for funds to the public are not new, the phenomenon of using the internet to directly connect with funders emerged recently and brought significant visibility to this practice.

Why use this method of funding, what are its advantages and disadvantages?

Crowdfunding is essentially a way to collect money from the public for a specific project. In the context of RadioActive, this would mean collecting money to finance a series of radio shows around a certain topic. The advantage of using crowdfunding to do this is that you will be able to present your project to your intended audience, and if they think your idea is good enough, you will be able to raise the money you need for the shows/series directly from them. The main disadvantages of using crowdfunding is that you will be competing with a lot of different projects for attention. Should your project be funded, you will be held responsible for delivery of the product you promised, on the budget and timeline you promised, by your funders.

The emergence of internet crowdfunding platforms (such as Kickstarter and Indiegogo), means that the process of advertising and collecting money for your project is extremely simple (although it is still labour intensive!), essentially following a template process provided by the websites.

What do you need to organise a crowdfunding campaign?

The only two things you need to organise a crowdfunding campaign are an idea (more on that below), and a crowdfunding platform. There are literally hundreds of different platforms to choose from, however here are a selection that specialise in ‘creative’ projects:

The following graphic gives a guide to some of the useful sites (adapted from http://visual.ly/26-top-crowdfunding-sites-use): 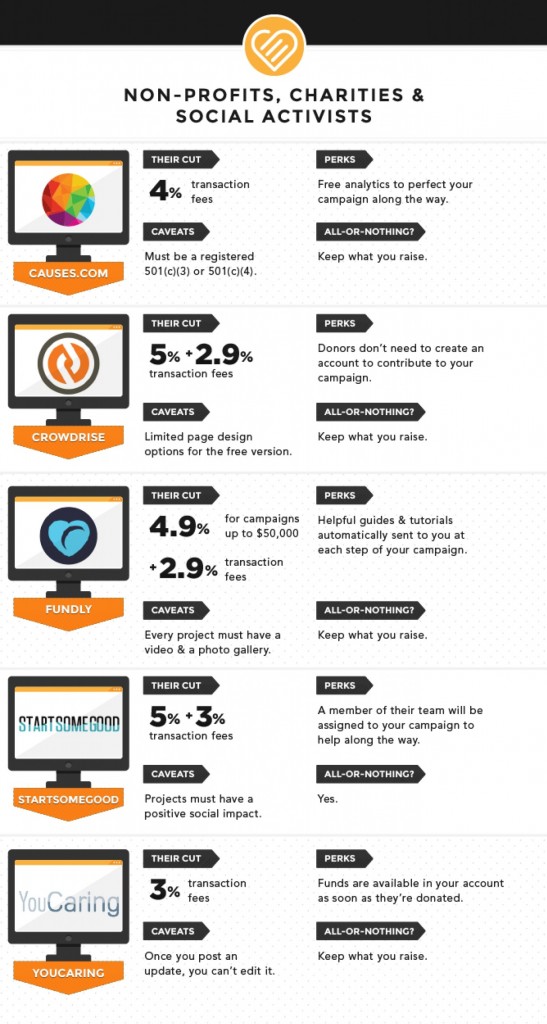 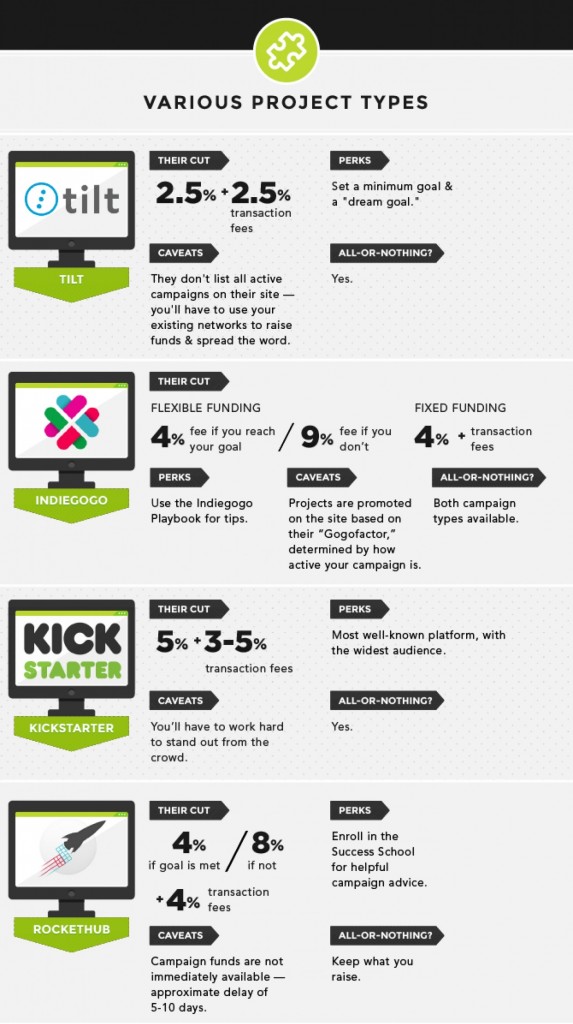 What do I need to keep in mind when organising a crowdfunding campaign?

There are several steps you need to follow for any successful crowdfunding campaign. These include:

Where can I find out more information?

A selection of free online guides to crowdfunding can be found below:

This project has been funded with support from the European Commission. 531245-LLP-1-2012-1-UK-KA3-KA3MP This publication reflects the views only of the author, and the Commission cannot be held responsible for any use which may be made of the information contained therein.

RadioActive101 UK and EU project training materials by Pontydysgu is licensed under a Creative Commons Attribution-NonCommercial-ShareAlike 3.0 Unported License.
Permissions beyond the scope of this license may be available at http://radioactive101.eu/.